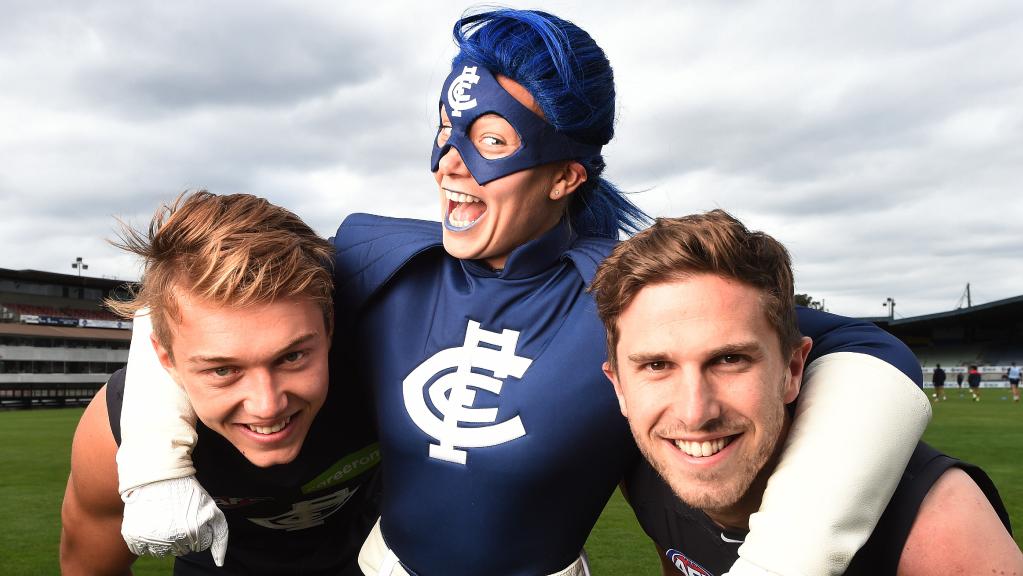 What do Navy Nina and gender equality have in common? Well, quite a lot when it comes to the AFL.

— Anais Nin
Earlier this week, the Carlton Football Club welcomed a new mascot – Navy Nina – to join Captain Carlton. While I have no doubt that there are commercial reasons supporting Carlton’s decision on this – the growth corridor for the AFL lies with growing its female markets – spectators, players and employees, symbolically, it also represents what we call the “one percenters.” ‘One percenters’ in and of themselves aren’t hard. But they do require a level of awareness to recognise their relevance; to actually see them in the first instance. Which is where their level of difficulty comes into it. In Carlton’s case, it’s acknowledgment of their desire to be inclusive of women in all aspects of their club – and all the benefits that flow from that, not the least of which is the commercial benefit from increasing it’s representation of female members. When it comes to gender equality, we must be intentional, and focus our efforts both on the significant interventions, as well as the small actions we can take. Why?  Because it’s what lives beneath the surface of the messages that society sends to men & women, boys and girls, about what – and more importantly who – matters. In a majority of the communities, institutions and workplaces in which we all operate, the concentration of power lies with men. When I read articles like the one about the new Navy Nina, I always scroll to the bottom to see the comments. This time, it was “Bernie” responding to an article in the Herald Sun who grabbed my attention with. I admit it – our instinct was to laugh at parts of this, but we also know that at the heart of exchanges like this, are attitudes deeply rooted in patriarchy and entitlement. No doubt they are the ones incoming Sex Discrimination Commissioner and Carlton Board Member is highlighting to the Carlton Football Club as needing to change. It’s attitudes like these that have, over the past 4 years, seen report after report emerge about the impact of gender inequality: abuse by men that comes with power and structures entrenched in patriarchy. In our workplaces, reports have revealed that a quarter of all surgeons and half of all female lawyers experienced bullying, discrimination or sexual harassment; – 1 in 2 women experience pregnancy related discrimination and more than 1 in 5 women experience sexual harassment. In our communities, 1 in 4 Australian women have experienced violence at the hands of an intimate partner. Even harder to believe is that 400,000 women reported experiencing violence while pregnant, and more than 500,000 women reported that their children had witnessed their assaults. It’s kind of hard sitting here today to imagine that our failure to showcase mascots as representative of both men and women could possibly contribute to some 80 women murdered last year at the hands of men who apparently loved them. But, just as sexist jokes are meant to be ‘funny’, – our friend Bernie probably smarted at his comments – behind every joke, act and symbol is some truth. We needed a Royal Commission into the Domestic Violence, and whilst I’m not yet through the 2000 pages, I’ve no doubt we need to implement all the recommendations. But to shift the dial on gender equality, we also need to open our eyes to the ‘one percenters’ we can contribute to addressing the preconditions to everyday sexism, gendered expectations, discrimination and of course domestic abuse of every kind. So as we embark upon another season of AFL & NRL, arguably the most male dominated of sports in this country, let’s be reminded that the ‘one percenters’ matter. And here’s to Navy Nina!
PrevPreviousWomen don’t need your advice on breastfeeding Jamie Oliver
NextBarry Divola on how to manage freelance work and parentingNext