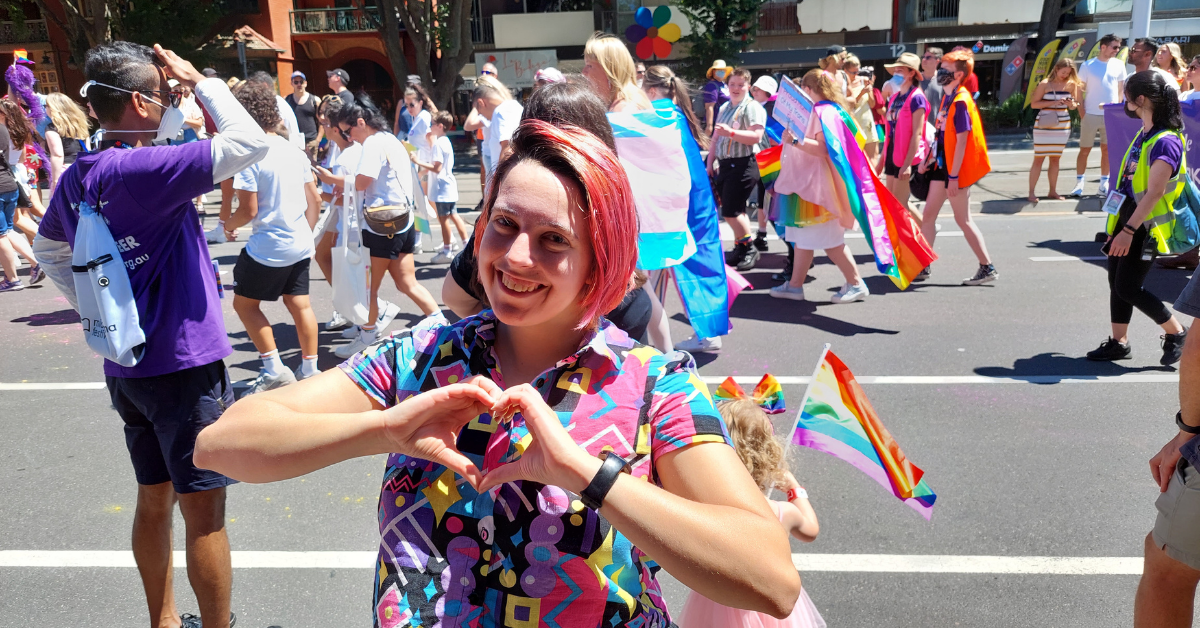 Maddy shares their experience as a gender-diverse person in the workplace, and what you can do to support LGBTQIA+ co-workers.

With our team largely based in Melbourne and Sydney, we’re in the middle of celebrating pride and all things LGBTQIA+ here at Grace Papers. Obviously this is something to embrace all year round on a national and global level, but with so much joy, creativity and love happening in our local communities right now we thought it would be the perfect time to share some of our personal experiences of being out in the workplace.

Maddy Rose is the Marketing Coordinator for Grace Papers, and came on-board as an out non-binary and queer person late last year. They’re sharing their experience as a queer person in the professional world, and their top tips to make sure everyone feel comfortable at work.

I personally have never felt openly victimised or abused at work, which is something that not every LGBTQIA+ individual in the workplace is lucky enough to avoid. Before Grace Papers, I was working in the Video Games industry and whilst the industry as a whole it has its own share of issues on the gender equality front (let’s just say some of the bigger companies are in desperate need of workplace equality coaching), the local community has always been wonderfully accepting and supportive of diverse identities. Coming from working as a freelancer in that space, to attempting to break into the more corporate marketing world was an incredibly intimidating experience as an openly non-binary and queer person.

When I went through a period of job hunting recently, I made sure to always ask the interviewer “what does your company do to embrace and foster diversity?”. More than once it threw the interviewer for a loop; like they had been prepared to answer any question but that. One interviewer, floundering, started talking about the lovely gay men and single trans-woman she knew who worked at the company. And whilst it was nice to know there would be some other LGBTQIA+ individuals that didn’t actually answer my question. I didn’t want to know whether or not I’d be the only gender diverse person at that company, but whether who I am as a person would be accepted, supported and respected. That I wouldn’t be misgendered constantly or have to listen to people express uninformed or even openly negative opinions about my identity or the queer identities of others. Ultimately I was asking a very simple question, one that goes beyond diverse genders or sexualities. “Will I be safe?”

Psychological safety is something I have only become aware of as a concept since working at Grace Papers as it is at the core of what we do, and that is more than shared through the culture and working environment at the company itself. Making sure everyone can come to work and feel safe – physically, mentally and emotionally, so that they feel empowered in their workplace and are able to ask for what they want.

I’m not a parent, but am very aware of discrimination LGBTQ+ families can face, from feeling excluded from existing parental leave policies to receiving inappropriate questions from their peers. In our previous research with Pride In Diversity, we found that whilst 62% of people felt like their company’s parental leave policies were inclusive and accessible to all, only 35% of the policies actually stated that it was inclusive of all family types. Regardless of what a person’s identity is, or where they are at in their parenting journey, they should be afforded the same level of respect and inclusion as any other employee.

Here are some things companies and individuals can do to make sure their LGBTQIA+ peers feel safe at work.

Want to learn more? Join us in for our Pride edition of LIVE Coaching on Friday February 25th – Feel the love: Celebrating rainbow families and diversity in the workplace

PrevPreviousPrivilege, Power & Leader’s Accountability – What Brittany Higgins and Grace Tame asked of all of us
NextGrace Papers CEO Prue Gilbert reflects on the significance of International Women’s DayNext