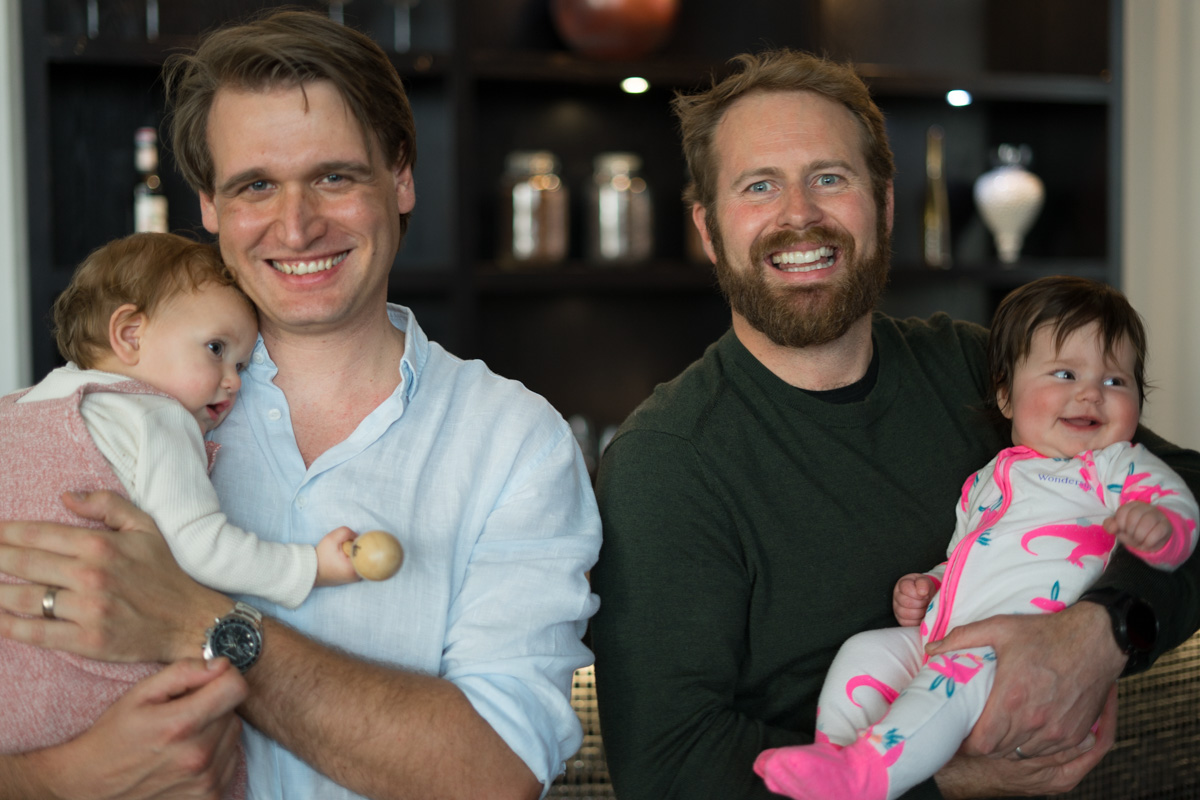 When Annabel Crabb hit the stage to give a speech about the challenges of being a working dad in Australia, she suddenly lost her train of thought.

And with good reason.

There, among the crowd gathered at Melbourne’s Southbank, were two men trying desperately to keep their baby daughters entertained.

“Sorry I am slightly distracted,” Annabel joked. “This is the first time I have been at an event and there are two guys with their babies in the back, doing the baby jiggle.”

And, at that precise moment, one of the aforementioned infants let out a loud squawk of outrage.

“I did not hire them from Baby Central Casting,” she laughed. “They just showed up.”

As it turned out, both men were busily navigating the ups and downs of paternity leave so that their wives could return to fulltime work.

They are in a tiny minority in this country, because, Annabel argues, it continues to be assumed that only women will alter their working arrangements once they have a baby.

“If a woman is pregnant at work, they start having conversations about how they are going to manage things (when they return),” she says.

This was never more evident to Annabel than when the newly elected New Zealand PM, Jacinda Ardern, announced she was pregnant.

While Ardern was bombarded with questions about how she would manage to be a mother AND run a country, it occurred to the ABC political writer and broadcaster that no-one was asking the same question of male leaders with young children.

If a female MP like Kelly O’Dwyer had been appointed Federal Treasurer, Annabel predicted, “The press conference would still be going today as people asked her, ‘How is this all going to work when you have kids?’

“I thought later, nobody is asking these guys: ‘How are you going to manage these jobs when you have kids?’ So, I thought well that’s a bit stupid. You’re a journalist. You can ask.”

So she did. She rang both the PM, Scott Morrison, and the Treasurer, Josh Frydenberg, and asked: How are you going to manage everything with the little kids and the big jobs?

“I have asked women that question a million times before,” she told the audience. “Women, who are balancing children and work, have almost this little laminated card they get out of their purse so that they can be like: ‘Well, on Monday I do this, my parents have the kids on Tuesday and blah blah blah…’

Annabel was quick to point out that she was not singling out the PM and his Treasurer for criticism: “Josh Frydenberg and Scott Morrison are highly engaged fathers and incredibly besotted. I am not running down their devotion to their children.”

The controversy over Arden’s impending motherhood inspired Annabel to investigate the issue further in her Quarterly Essay, Men at Work: Australia’s Parenthood Trap.

“To me it just seemed like a really good example of the strange double standard that we have in Australia about who we expect to do what,” she explained.

“Even in a modern relationship, it’s perfectly reasonable and expected for a woman to change the way that they work when they have children. That’s why we find it difficult to acclimatise to the idea that a woman with a big job might spend heaps of time working and outsource elements of parenting.

“Men who have a big job and little kids, their lives change hugely and yet we don’t expect them to change their working lives in any way at all, which is kind of sad really.”

In the past 50 years, women have drastically changed the way they work and live while the male roles have remained largely the same. Annabel says this isn’t because men don’t want to change or to find better balance between their work.

“Women have really got stuck in and changed the way that they work. They have moved into work at an enormous rate,” she said. At the same time there had been little change in men’s work arrangements.

“Yes, we have some stay-at-home dads but the hard data across Australia says that male behaviours haven’t changed very much at all. In 1991 there were four per cent of families who had stay-at-home dads and that’s now at five per cent.”

Studies showed women still did a lion’s share of the childcare and household chores, in addition to their paid work, a situation which created tension at home.

“Discussions between two parents who are at the end of a busy day — pre their glass of Pinot Gris — and are tired and emotional, can really degenerate into a: ‘You arsehole, why don’t you put in more?’ she said, with a laugh.

According to Annabel, many men feel either uncomfortable or unable to reduce their work hours to be more involved on the home front.

“Australia set the paid parental leave scheme at 18 weeks at minimum wage. We don’t have one of those glorious Scandinavian systems which have buckets of money and offer people 54 weeks paid leave or whatever,” she said.

Annabel believes that gender equity will only be achieved when men are as free to leave the workplace (to meet the changing demands of their families) as women are to enter it.

“As long as we assume women are the only losers in this situation, nothing will change,” Annabel reflects.

“Because the truth is that everybody loses in a system like this. Women who feel hard done by, men who feel trapped at work, children who don’t see enough of their fathers.”