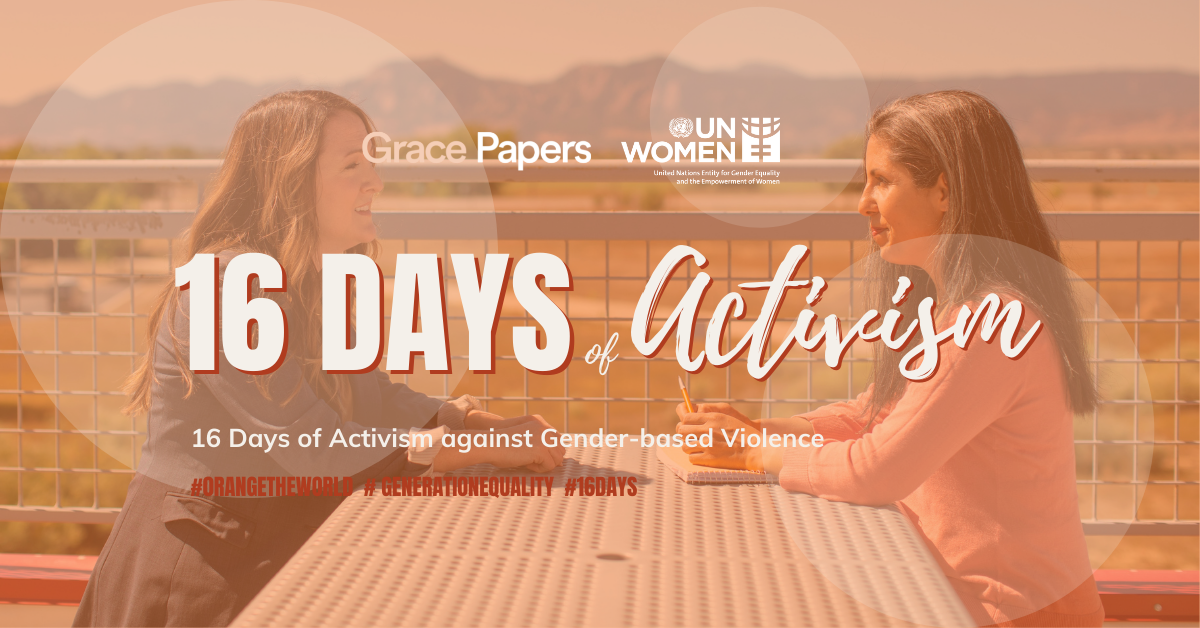 As part of 16 Days of Activism, we are sharing how Sodexo is facing gender-based violence head-on and ensuring the safety of vulnerable groups.

In our work, we bear witness to the often invisible and everyday activism by individuals and teams striving to put an end to gender-based violence by empowering gender-balanced outcomes for all. Over the next 16 Days of Activism, we’ll be sharing initiatives of our partners – individuals and organisations – as they systematically disrupt harmful gender stereotypes and structural inequality, and take action to advance gender-equal outcomes that prevent violence against women.

“Sodexo has been on a journey, for quite a long time, in terms of connecting all the different dots around safety, culture and quality, and performance.” says Prue Gilbert CEO for Grace Papers.

To further this they have ingrained their gender equality and diversity programs into the core of what they do.

“It is not a HR initiative, it is not a nice to have, it is a part of who we are.” says Jacqui Bainbridge, Head of Indigenous Affairs, Diversity and Inclusion at Sodexo.

With the cases of workplace sexual harassment that have been brought to light over the past few years, leaders at Sodexo like Jacqui Bainbridge, have been able to start talking with their employees and confront the fact that it had been happening in their own organisation.

They did this by creating a culture of openness, support and safety to drive that conversation; asking everyone to report not just current incidents but historic incidents as well.

“We didn’t shy away from the fact that it had been happening in our organisation but we knew that it would have been underreported and in the last six months we’ve seen a rapid increase in the amount of change.”

As Sodexo has a high percentage of employees on mining sites, physical safety is an obvious priority and they have shone an equal light on the focus of psychological safety of employees. They are implementing safer spaces through physical changes to facilities and introducing campaigns like Ask for Angela, to increase work-life physical and psychological safety nets. Ask for Angela has been implemented at venues throughout Australia to keep people safe from sexual assault by using a codeword “Ask for Angela” at the bar to identify when they are in danger or are in an uncomfortable situation.

Alongside the changes for employees from a psychological safety perspective, they’ve also implemented a physical safety review for employees living on mine sites and flying in and out of work.

“We stand for quality of life and that’s really the foundation of our gender equality and diversity program in general”.

Jacqui, in particular, is taking an intersectional approach to create a safe and supportive workplace for vulnerable groups.

“We have Indigenous mentors, right across our workplace that are there to support our Indigenous employees, through a range of issues, from a personal or professional perspective. We have trained them up specifically around how to appropriately respond if they have a disclosure, to them.

We have also provided mentors with Mental Health Training, specifically to help them adjust. And we’ve given them the tools to help them grow as individuals and provide them with the right support networks, specifically targeting our Indigenous employees, because the data tells us they are likely to be experiencing higher levels of violence.

We also know that Aboriginal people are less likely to call an EAP style hotline. So we have actually worked without a provider to get an Indigenous one specifically for them so they can access that help, but we also have given a range of Aboriginal Health medical services and numbers so that they have culturally appropriate responses and support around them.”

Grace Papers is the only evidence-based workplace gender equality platform that directly contributes to the prevention of inequality by dismantling the stereotypes that are harmful to all genders and ultimately contribute to gendered violence. We were recognised by the Australian Human Rights Commission for our work.

How can you get involved?

Partner with us to receive insight and support on how to make a safer, more equal workplace. Together we can dismantle gender stereotypes and provide an intersectional lens on parenting and care – while addressing preventions against gender-based violence towards women.

Read more about what we do and get involved here.