5 reasons for the AFL to offer pay equity for women. Now. 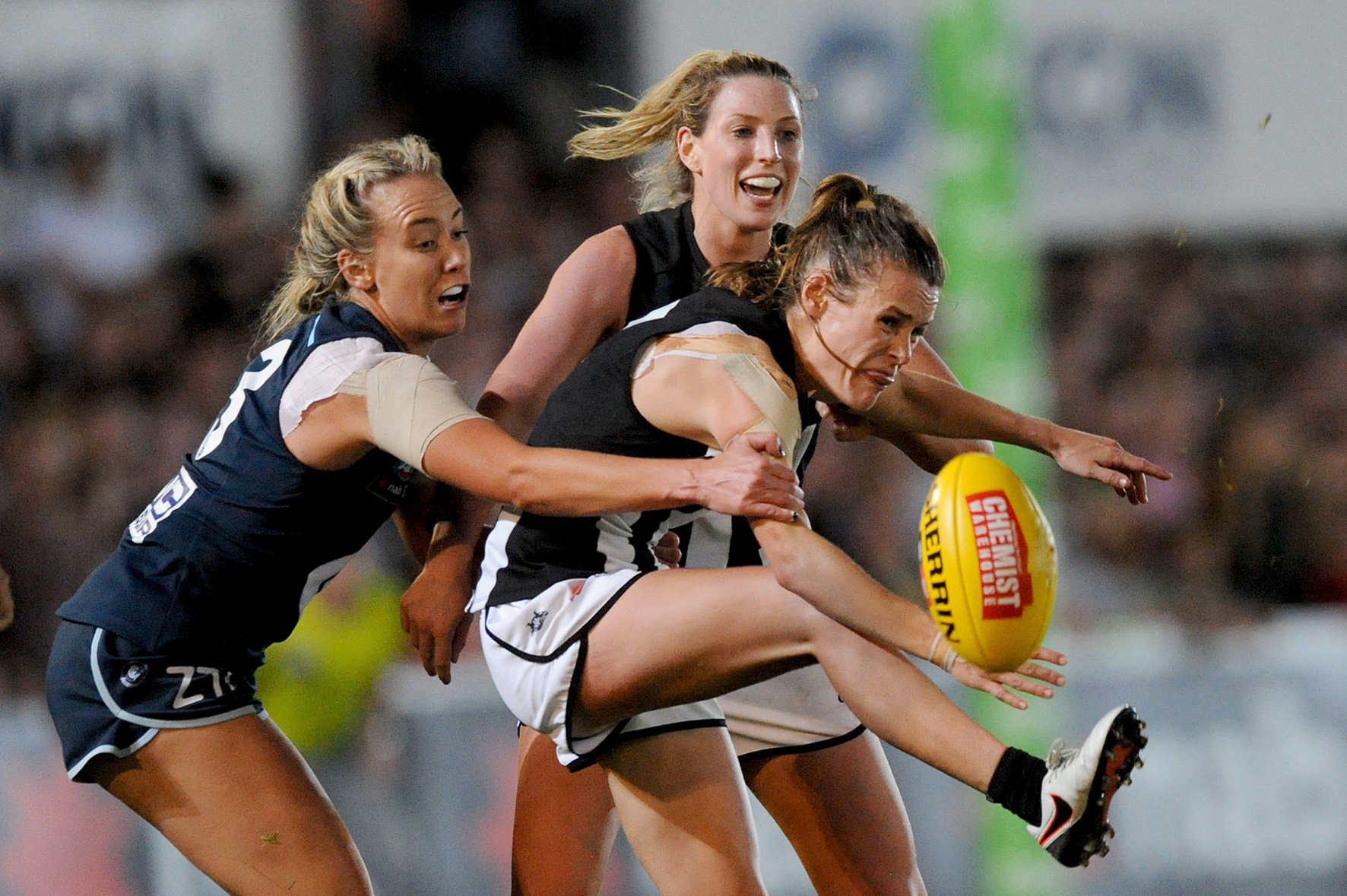 Prue Gilbert outlines the business case for equalising the pay between male and female players in the AFL.

Earlier this week, Emily Bates was crowned AFLW best and fairest. She has been praised for her dedication and professionalism, putting training first over any other commitments. Whilst it’s wonderful to see her passion and skill recognized, this comes with the knowledge that she is still earning at least 2 to 3 times less than the lowest-paid AFL players.

An article from the ABC covering Bates’ win mentions:

“With numerous COVID-19 outbreaks at most clubs, season six of AFLW saw the playing cohort deal with a range of challenges including last-minute changes to the fixture and mid-week games, all balanced alongside work and other responsibilities.”

There is an awareness that these players are balancing incredible athleticism with “work and other responsibilities”, not to mention how disproportionately household and carer responsibilities fall to women. What is being said when these women are not receiving equitable pay?

This article was originally published by Grace Papers CEO Prue Gilbert a few years ago and unfortunately still holds relevancy. Whilst things have improved in terms of salary for the AFLW, it is nowhere near equal. In fact, it’s low enough that most players have to work another job to afford to live whilst playing the game that they love. For the 2022 season, the highest-earning players received $37,155 whilst the majority earned $20,239. Compare this to the average season earning for a player in the AFL – $372,224.

With the AFLW Grand Final just around the corner, here are just 5 reasons why the AFL needs to level the playing field.

A Message from Prue

Talking of equity, a few years ago I was driving my then 5-year-old son to a birthday party, and we inevitably started talking about his own upcoming birthday party. A football party, at the Boulevard oval, Dad can umpire, Ned can be captain of the other team, we’ll eat hotdogs – he went on – you get the drill, and very few details were ignored. And I have to admit that until this point, there had been no discussion about girls being invited or not. So his next comment really stumped me “and the girls can be the crowd.”

Seems harmless and innocent, and on the one hand, it is. But if you look at the coverage of women’s sport, you very quickly see that it is rarely, if ever, featured on the back page of the paper, nor showcased during prime time tv. That space is usually reserved for sportsmen – AFL, NRL and Cricket.

Of course, the introduction of women to an arena traditionally dominated by men requires the challenging of biases and stereotypes as this quote from “Bernie”, which featured in the comments section under an article about the introduction of a female mascot, Navy Nina by the Carlton Football Club, demonstrates:

“This is a sport devised by males, for males, played by males. If the sheilas want to watch, too, of course, they’re welcome. But all this PC crap about “gender imbalance” and “need for cultural diversity” is destroying the game. It would be the same as women whingeing about not enough men watching netball. Give it a flipping rest and get back to the basics, where PC is banned. Get on with the game and just play footy.”

But, just as sexist jokes are meant to be ‘funny’, – our friend Bernie probably smirked at his comments – behind every joke, act and symbol is some truth.

This is why it was so important for the AFL to seize the opportunity to prioritise gender equality with the introduction of the Women’s League, from the outset.

The AFL’s position is that the Women’s League is a start-up competition. But that’s not accurate. In an Annual Report released shortly before the AFLW’s launch, the AFL reports that female participants comprise 25%, that there are 629 dedicated female football teams, and that the number had grown 27% from the previous period.

Although the NAB AFLW recently released it’s Women’s Football Vision 2021 – 2030 and as part of that vision, proclaimed that NAB AFLW players are to become the highest paid domestic sportswomen in the country, there is still a way to go.

5 Reasons the Playing Field Must be Equal

1. You can’t call them professional and then tell them they can’t earn a living from it.

The introduction of a women’s league means the professionalisation of the sport for women. But if female players can’t earn a living from playing AFL, then they fall short of the definition of “professional”, which the Oxford English Dictionary defines as “Engaged in a specified activity as one’s main paid occupation rather than as an amateur: a professional boxer.”

Not only will female players be unable to make a living from playing AFL, they will have to negotiation substantial flexibility with their current employers just to participate, meaning many will actually be worse off financially for privilege of playing AFL. As an AFL hopeful who is also a year 12 teacher told me, her Principal is not going to be able to explain to the students and their parents that she needs to take every second Friday afternoon off.

2. They can afford to, and the business case makes sense.

While women have always accounted for 50% of VFL/AFL attendances, in recent years female footballers have emerged as the fastest-growing participation sector in the game.

Every new business proposition requires investment to get it off the ground. The AFL knows this only too well. As Erin Riley so eloquently put it,

Both the GWS Giants and the Gold Coast Suns were able to draft and pay players at standard AFL wages before their teams joined the competition in 2012 and 2011 respectively. It was understood in order for the clubs to survive and be competitive, they needed to invest even before they took to the field. Why should women be treated differently?

And let’s be honest. With its lucrative broadcasting deal, the AFL can’t exactly cry poor.

3. Athletes need a reason to choose AFL beyond just passion

The competitive nature of the sporting industry means that the top talent will be attracted to sports that treat and recognise men and women equally. And when we have the best talent, we also know it will attract a bigger audience which will generate greater returns.

But as we learned from the Rugby 7s’ success, the best talent has options. And there’s no gold medal on offer for playing AFL…

Many Rugby 7s gold medalists were passionately pursuing goals in other sports and many certainly didn’t have the Olympic Games on their vision board. Even more surprisingly, almost none of the girls were playing Rugby Union!

What’s more, other sports are paying more. Take netball, where the salary cap for each team is $500,000.

If the AFL is going to compete for the best talent, they’d better put their money on the table; gratitude for the opportunity to play AFL isn’t going to underpin the success of the competition.

4. Attitudes to women in sport are mirrored in our community

It is important – for the female players as well as for the message it sends to women and girls across the community – that the AFL demonstrates that women players are valued, and treated with respect and dignity.

When it comes to gender equality, we must be intentional and focus our efforts both on the significant interventions, as well as the small actions we can take. Because it’s what lives beneath the surface of the messages that society sends to men & women, boys and girls, about what – and more importantly who – matters. In a majority of the communities, institutions and workplaces in which we all operate, the concentration of power lies with men. And whenever men are paid more, we make a big statement about who matters more.

It’s attitudes like these that have, over the past 4 years, seen report after report emerge about the impact of gender inequality: abuse by men that comes with power and structures entrenched in patriarchy. In our communities, 1 in 4 Australian women have experienced violence at the hands of an intimate partner. Even harder to believe is that 400,000 women reported experiencing violence while pregnant, and more than 500,000 women reported that their children had witnessed their assaults.

And in our workplaces, report after report has revealed the prevalence of bullying, discrimination and sexual harassment inflicted upon women. Status, pay and recognition matter.

To pay women less than men for doing the same job is to disrespect them, and, as former Prime Minister Turnbull:

For the AFL to keep repeating that “the female players understand that we are on a journey” is nothing short of exploitation and abuse of power over a playing group so passionate to finally do what they’ve always dreamed of – play professional football in an AFL competition.

Despite 50 years of legislated pay equality, the total remuneration gender pay gap based on 2022 WGEA data is 22.8%

But there are some industries where women are woefully underpaid by comparison to men.

Disappointingly, there are significant disparities between women’s and men’s earnings from professional sport.  Workplace Gender Equality Agency data shows that in the category of sporting clubs and sporting professionals there is a 50% gender pay gap, meaning men earn on average twice as much as women.

Gender equality is increasingly recognised as a business priority among smart Australian employers wishing to remain competitive in their particular industry – the AFL should be no different.

“It’s an issue of equity and we believe strongly that’s the right thing to do but it’s also a good business decision for the AFL.”

Improve employee retention, satisfaction and wellbeing with a strategy that addresses the causes of inequality, not just the symptoms. Consult with Grace Papers today

PrevPreviousA golden strategy for attracting the best talent
Next10 tips to retain your talent while pregnant and beyond.Next