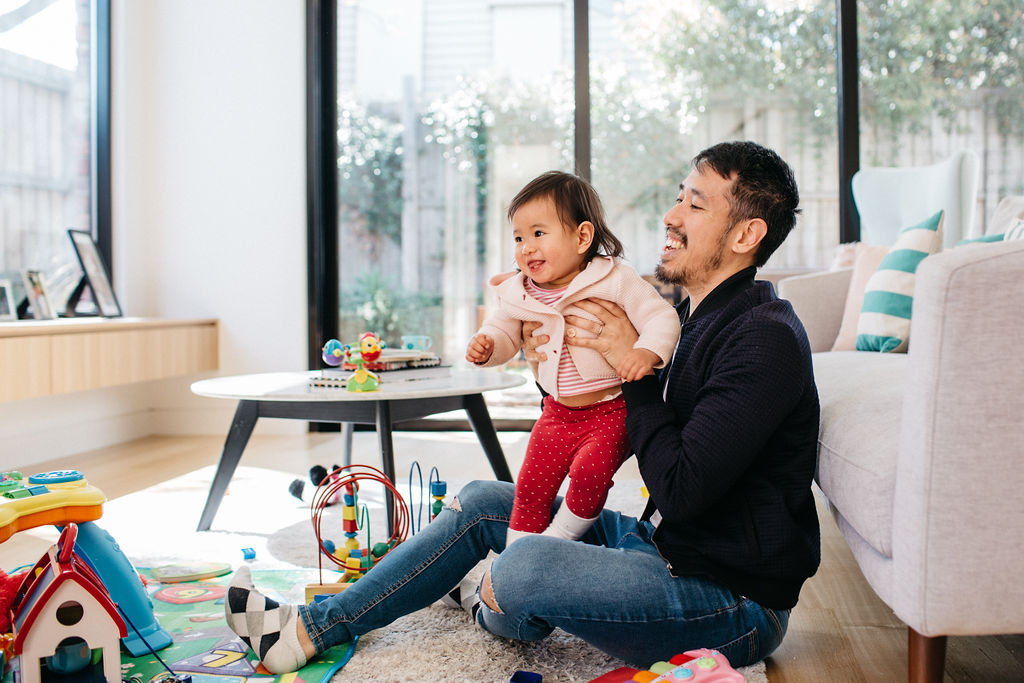 Parental leave was quite the shock to the system for Christopher Ong. The new father naively thought he would spend his days strolling in the sunshine. Or going out for coffee while his baby daughter Ava slept soundly in her pram. Instead he often found himself at home alone while his tiny daughter screamed for hours at a time…

Parental leave was quite the shock to the system for Christopher Ong.

The new father naively thought he would spend his days strolling in the sunshine. Or going out for coffee while his baby daughter Ava slept soundly in her pram.

Instead he often found himself at home alone while his tiny daughter screamed for hours at a time.

It was lonely. It was boring. And it was stressful.

But he has no regrets because the 15 weeks he spent at home as Ava’s primary carer allowed him to better bond with his daughter and have his eyes opened to what so many new mothers struggle with every day.

“It was a beautiful experience, but I also really struggled to cope at times,” he confides.

“I found myself getting angry for no reason which isn’t something I would usually do.

“I felt so isolated that I decided to join my wife’s mothers’ group. But I couldn’t really identify with some of the things they talked about, like breastfeeding, or the changes they were experiencing in their bodies. I obviously couldn’t join in those conversations.”

Being an involved and present father has always been important to Christopher. From the moment Ava was born he has been a completely hands-on dad. When his wife, Sharon, had to be taken off for surgery soon after Ava’s delivery, a midwife handed him Ava and said: “Here dad, you look after the baby!” For the next hour, father and daughter were left alone to bond.

“My dad wasn’t around a lot when we were growing up because he was always working,” Christopher says.

“His idea of being a good father was to work hard and be a good provider. I love my dad, but I don’t have any memories of us kicking the football together in the backyard.

“I want to be able to play football with my daughter and go to her school concerts or piano recitals. It’s important to me to have those experiences with her.”

One of the reasons Christopher joined the PwC digital services team two years ago was the fact that the company is so supportive of employees striking a balance between work and family life.

Men are encouraged to take parental leave and are provided with support and guidance from Grace Papers.

Christopher also found a terrific role model in his team leader, Simon Doukas, who is a big advocate for working fathers at the firm and has only just returned from parental leave himself.

After 15 weeks at home with his daughter, Christopher acknowledges he felt some trepidation about returning to work full time.

“I can’t imagine how it must feel to come back after 12 months away,” he says.

He points out that the regular contact from Grace Papers’ executive coach and facilitator Genevieve Simkiss, while he was at home, helped get him through some of the tougher days of looking after a newborn.

“Those conversations with Genevieve were really beneficial,” he says.

“I cannot speak highly enough of the initiative Grace Papers take with parents to help them when they go on leave.

“There are a lot of dudes right now at work who are about to go on leave and it’s important for them to know that, while it’s worth it, it’s not going to be all sunshine and rainbows.

“But when I get home from work now, Ava puts her arms out and says: ‘Dadda!’ I am not sure we would have as strong a connection if I hadn’t had all that time with her at home. So that’s special.”

PrevPreviousEvans Above! How Carys Evans from DELWP navigated a promotion after parental leave
NextTabcorp goes to great Paynes for movie successNext