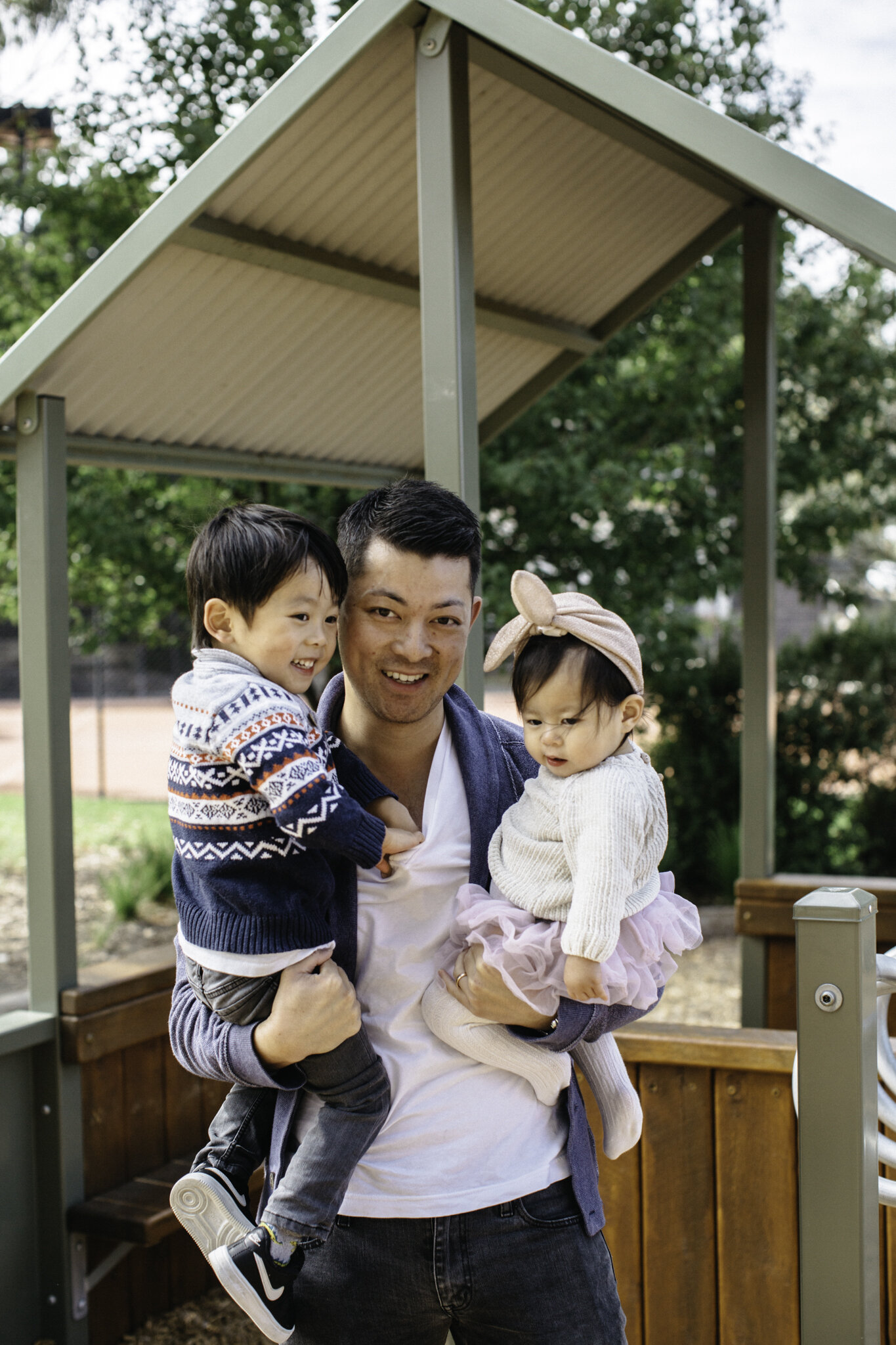 Julian Tai shares how important EY's leave policies have been in supporting him to make the most of career and care .

JULIAN Tai is a father of three but it’s often easier and less painful for him to tell people he has only two children.

And talking about this subject is still largely taboo.

Now a proud dad to son Sage, four, and daughter Piper, one, the EY director was sitting at his desk back in 2014 when he received the call no expectant parent wants to get.

His wife’s doctor was on the end of the line telling him that he needed to get to the hospital as soon as possible.

Julian’s heart sank. His wife Cheryl was heavily pregnant with their first child and had gone to the doctor for a check-up because she had noticed their baby’s movements becoming less frequent.

Being young and fit and 38 weeks into an otherwise straight-forward pregnancy, the couple assumed doctors would simply reassure the concerned mother and send her on her away with a clean bill of health.

That was not to be. Instead of being the happiest day of their lives, the moment they held their first child in their arms, it became the saddest.

The couple spent time with their precious bundle. A photographer from the Heartfelt organisation came out to take pictures of them with their little girl. Later they held a funeral so that friends and family could grieve their loss with them.

“It was a big shock, and it’s only been in the past year or two that I’ve been able to talk about it without tearing up,” Julian says.

“Cheryl had a cold the week before and then felt the baby’s movement slow down, but she wasn’t sure whether it was because the baby was getting bigger. And obviously, as you get closer, there’s less room for the baby to move.

“But then it went to a period where she hadn’t felt movements in maybe half a day. And we both felt that maybe something was wrong with that. So unfortunately, she went in and they just couldn’t find the heartbeat on the ultrasound.

“It was an awful experience. But I think it’s obviously made me better appreciate having two healthy children.”

The pain was immeasurable. And there was a long period where the couple found even the sight of other people’s babies too much to bear.

“It was life changing at the time, but fortunately work was incredibly supportive and in that they just really wrote me a blank cheque, and said: ‘Look, this is horrible. Just take all the time you need to be with your family and your wife,’

“That was incredible especially when you consider the timing of when that happened is typically our busiest period. Working in the finance and accounting profession, July and August is a blackout period for taking leave ordinarily. But I didn’t come into work for about three and a half months over that period and, given the circumstances, they never once chased me.”

Julian says he found his co-workers and the partners at EY equally supportive when he told them Cheryl was expecting their second child four years ago. The couple were understandably anxious given their previous experience, but happily welcomed a healthy boy without incident.

“I think that experience made Cheryl and I a really strong team because we know that we’ve handled something really horrible together,” he explains.

“Unfortunately, there’s no way to predict the future. And we hope we don’t have to deal with something like that again, but you never know. I guess we know that if anything bad happens in the future we have the support of each other.”

That teamwork has been evident in how they’ve parented their small children so far.

Cheryl took 14 months of parental leave from her job at World Vision to care for Sage and when she finally returned to work felt reassured knowing Julian would take the baton with his parental leave.

“I went through a lot of guilt that I wasn’t there for her for that doctor’s appointment and that I was practically asking her all the time (during her other pregnancies): ‘Hey, how’s the baby going?’ Before we lost our baby I just assumed everything was going to be okay.

“Once that event happens to you, you just become super anxious. And your mind’s default becomes that the pregnancy is not going to go well.

“That’s what you default to. And even though it’s gotten better now, that fear is always in the back of your mind whenever I get a call at work from the childcare or from my wife that something might have happened to one of the kids.

“Unfortunately, it’s always a part of you.”

His experience has also made Julian even more appreciative of spending quality time with his children.

Julian feels lucky to work for an organisation like EY which offers such progressive leave policies.

In addition to generous paid parental leave entitlements that can be taken on a flexible basis by either parent, the accounting firm now offers staff the ability to self-fund up to 12 weeks “life” leave so that they can take time off if their family needs them. Or simply to take an extended break, recharge and see the world.

It also introduced the ground-breaking “term time” option which allows staff to take paid leave at the same time as the school holidays, by facilitating a salary-sacrifice arrangement during the year.

And, in further evidence of its commitment to flexibility and culture, the company has engaged Grace Papers to support people like Julian in their parental leave journey.

Yet taking advantage of these impressive entitlements has been a gradual process. Julian recalls that he was one of only a handful of male employees who applied for parental leave back in 2016.

“At the time there was a lot of internal marketing around the policy encouraging dads to take it,” he says.

“But at least my impression, at the time, was that there wasn’t a high number of other dads taking parental leave.

“As soon as I mentioned my intention to take parental leave to the partners that I work with directly — some of them being  males who had children 15 to 20 years ago now — they were all extremely supportive.

“If anything, they were wondering why I was only taking 12 weeks off rather than my full entitlement.

“It’s interesting because many of them would be from a generation where you only took one or two days off as the dad when a child was born. But they were just genuinely happy to see people doing it now.”

It’s a different story this time around. Now on leave to look after his daughter Piper, Julian says far more EY fathers have followed his lead and taken time at home with their young families and supporting their partner’s return to work.

And while parental leave could be hard slog, Julian loves every minute he gets to spend with his family.

“We need to change the question to make people feel more comfortable.”

PrevPreviousIs it time for a StayCation?
NextIn the spirit of Human GraceNext