#Metoo – a blueprint for change 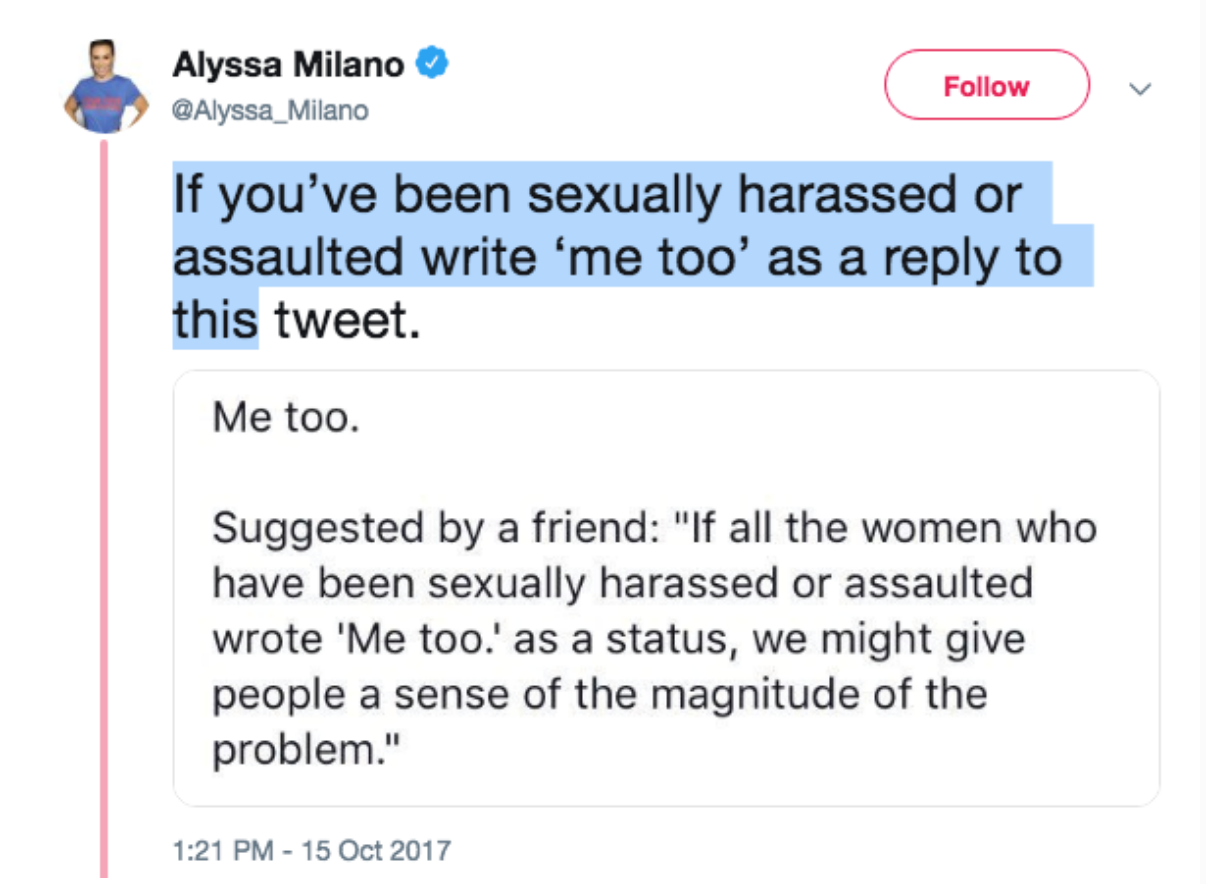 For survivors, #metoo is both empowering and exhausting. Publicly, there is a push for women to come forward and tell their stories, but my concern has always been that this process, without significant change to reporting expectations, can cause more damage to those victims who are expected to relive their experiences - this time, of course, with public scrutiny.

On 15 October 2017 the #metoo shockwave reverberated around the world. It came on the back of an increasingly global movement advocating for women’s rights – the Women’s March in January 2017, for example, saw more than 600 rallies in 60 countries calling for equality in the face of a potential erosion of women’s rights under Trump and other populist politicians.

But there was something about #metoo that was different to any other movement we’ve seen. Apart from its global and viral nature, this movement was started by women working collectively, and each of the survivors was better known and had a bigger public platform than their perpetrator, Harvey Weinstein.

To assume this automatically translates into workplace change, given existing workplace structures, is naive.

#metoo is both empowering & exhausting

For survivors, #metoo is both empowering and exhausting. Publicly, there is a push for women to come forward and tell their stories, but my concern has always been that this process, without significant change to reporting expectations, can cause more damage to those victims who are expected to relive their experiences – this time, of course, with public scrutiny.

As founder of the #metoo movement Tarana Burke said this week:

“…the idea of sharing your story has become so popularized. We are in a time where the more you share about yourself, the more people like you; the more likes you get, the more attention you get on social media. So things are framed so that they have to be public and they have to be popular in order to be valid. What we’re trying to do is counter that narrative and say, “You don’t have to tell your story publicly. You don’t have to tell anybody what happened to you.” You have to get it out — but it doesn’t have to be at a poetry reading. It doesn’t have to be on social media at all. It could be a trusted friend. It could be your journal.“

Yet my fear is that if we don’t take this movement into our workplaces, we run the risk, especially in the wake of Brett Kavanaugh’s confirmation to the US Supreme Court, of not achieving the change #metoo has the potential to bring.

Evidence of some change, but a long way to go

Twelve months on, and not only is the world is paying attention but there is evidence of some change. In Australia, more than 2000 stories have been shared with Tracy Spicer which has triggered a national enquiry into workplace sexual harassment. And in our workplaces, a small number of high profile cases with positive responses from leading Australian companies have made us hopeful that, when reported, sexual harassment in the office will be dealt with effectively and seriously.

But change, it seems, is still a long way off. In September, the Australian Human Rights Commission conducted the 4th sexual harassment prevalence survey (yes, 4th), revealing the reported prevalence of harassment jumped from 21 per cent in 2012 to 33 per cent in 2018.

A scan of recommendations from the past 4 reports has repeatedly emphasised a focus on how to increase reporting. Yet still, current reporting expectations do little more than silence those it is supposed to protect. And the data from the most recent survey really requires us to completely reimagine the system of protection & prevention especially when it comes to expectations about reporting:

Fewer than 1 in 5 people (17%) made a formal report or complaint about workplace sexual harassment. And almost 1 in 5 people who did report were labelled a troublemaker (19%), were ostracised, victimised or ignored by colleagues (18%) or resigned (17%).

The impact of sexual harassment is well documented – depression, anxiety & post traumatic stress disorder. Because sexual harassment rejects the fundamental rights of an individual to dignity & agency. As we have seen in the context of the Royal Commission into Sexual Abuse, certain crimes that are committed incite shame on part of the survivor in the way many other crimes do not. And sexual harassment/assault is a crime that that has shame implicitly connected to the victim.

Yet redress through our laws, policies and processes currently fails to acknowledge the human experience and healing required to report. It is simply unsafe to report when you are still experiencing shock and shame only to then have your whole credibility interrogated.

It’s time to flip the system, and place human experience & healing at the centre of it. We need systems that assume women as well as men in our workplaces.

#metoo – a blueprint for workplace change

So how can we reimagine our redress systems & processes?

Firstly, we need to focus on healing before reporting. This might mean teaching people how to document their experiences first. It might mean directing them to engage with a trained counsellor, GP or other healer through an EAP platform before talking to the workplace about it, and to attain advice as to how to tackle the complexities of their experience without fear of losing their job.

Secondly, we need to involve bystanders. The most recent AHRC report revealed a massive 40% of sexual harassment incidents were witnessed by at least 1 person. What would it look like if we understood firstly why bystanders did not speak up, and then equipped them to both speak up, and to report?  In my conversations with bystanders and other ‘good men’, I am always surprised that they so often reveal they did not know what to do. They often go on to share their fear of speaking up, likening the fear to being in some way viewed as a whistleblower or “dobber.”

Thirdly, we need to engage with perpetrators and involve them in the redress process. We must remove their power, and invite them to understand the impact of their actions. As I’ve written before – its time to end the “Comeback Boys Club.” This will inevitably involved legislative reform, and Sarah Rey, Partner Justitia Lawyers has addressed this well in this article.

Finally, we – survivors – need to bring the #metoo movement and what has still largely been a viral social movement into the workplace. This means acknowledging that its not the movement that will start and sustain the action, but the emotion behind it. This is not about waiting for leadership to make changes – for movements rarely begin at the top. Rather, this is about taking our collective anger, hurt and frustration and funnelling it into a positive vision for change. Change underpin ned by new beliefs that recognise the dignity of each person, and place both women and men at the heart of the system by connecting these new beliefs and behaviours to the organisation’s purpose and values.

For as Gloria Steinem once said:

“No one can give us power. If we aren’t part of the process of taking it, we won’t be strong enough to use it.”