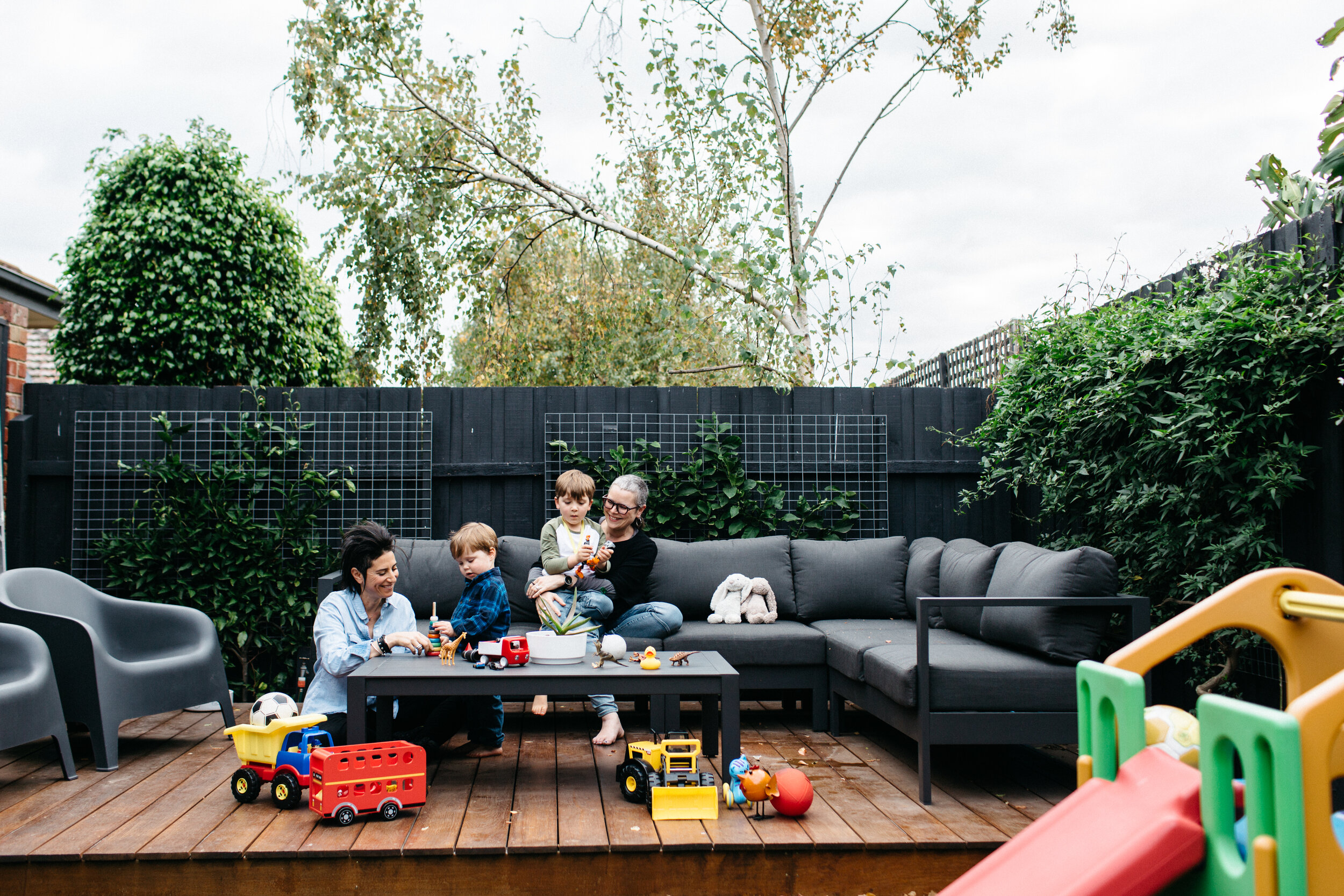 Rebecca Forgasz is indomitable. Associate Professor, climate activist, and mum to two small sons, she simply gets things done. Today we speak with Rebecca about her path to the peak of her profession, grace versus gravitas, and the interchangeable approach to parenting she practices with her partner, Debbie Kertesz.

Can you tell us a bit about your path to becoming Director and CEO of the Jewish Museum of Australia? What would you say is your professional vision?

Giving a full response to that question might not be wise! I’ve worked at the Museum on-and-off for a long time; I’ve always loved this place and felt committed to its mission of engaging people with Jewish culture. But for me, the Museum has never quite realised its potential, so my professional vision, in a sense, is to really see that happen. For the Jewish community and all Victorians, our educational role is more important than ever. I also think when you become a leader of an organisation, it becomes less about your personal achievements and more about a shared culture and vision that enables everyone to do their best to achieve the organisation’s mission.

You said you’ve been at the Museum on-and-off for a while. Can you tell us a bit about your path to directorship?

I started when I was a student; I had a part-time job working with the Education Officer. Then I got invited to curate an exhibition – I had absolutely no idea what that entailed, I had zero thoughts around curatorship, I was taking women’s studies! But I thought to myself, ‘that sounds like fun and, if they reckon I can do it, I’ll give it a go.’ I got completely hooked on how exhibitions combine the creative and intellectual, so I stayed on for a number of years, essentially as a curator, and realised that was what I wanted to do. I had never been ambitious regarding my career. I had no clear idea about what I wanted to do, or where I wanted to go. I didn’t apply for jobs all that often; I’d be offered an opportunity and, if it was interesting, I’d take it. After leaving to work in exhibition management for a couple of other organisations, it dawned on me that I’d love to lead the Jewish Museum one day – my love for and belief in the place never left. After that, I became a bit more strategic. I knew I had the curatorial piece, and I’d done a lot of teaching, so I had the education piece too. But that didn’t feel enough. One of the fundamental pieces missing was fund raising. So I went out quite deliberately and sought opportunities around that, starting at the Australian Centre for Jewish Civilisation at Monash University, then in the greater university’s advancement division in donor relations. Then quite unexpectedly, the director of the Museum – who had been in the role for 27 years – announced her resignation. I thought, ‘Damn, it’s too early for me!’ But I applied and got the job, aged 35. It’s been nearly nine years, with two parental leaves, since then.

Your sons, Felix and Levi, are now aged five and two. How have you worked to marry such a big role with care for your family–and what you’d like your parenting legacy to be?

Before I had kids, I quite regularly worked 10 or 11 hour days; I rarely do that now. I went into starting a family really clear on my priorities, particularly around the time I’ll never get back. So when I don’t do drop-off, I get in early, and always leave at 5pm so as to be home for the end of the day. We live nearby and, if work accumulates, I’ll come back into the Museum after the boys are in bed; I try to keep my work and home contexts separate. Very occasionally, I’ll work late or on Sunday. The other thing is, when I had both babies, I took seven months of maternity leave, and Debbie did the same. We were at home together that whole time, which was massive in terms of setting the tone around how we wanted to parent. From the very first day, we shared everything.

That’s incredible – many partners only take one or two weeks!

I know, a lot of friends had dads at home for days or weeks; it’s then so hard to understand the rhythm of the baby’s day. If you’re the primary carer, you know what needs to happen. And that applied to both of us – we knew our babies equally, when they needed to feed and sleep. We talked through everything, bouncing ideas off each other, and never felt alone. The idea was to be completely interchangeable for our kids. Of course, they have stages they go through where they prefer Mama to Mummy, and as they get older they develop different relationships with different people. But we’ve always known that one of us could be reading before bed and, if something happened and we had to get up and go, the other could take over and it would make no difference.

How did you manage those seven months financially?

Through a combination of government-provided and employer-provided parental leave, savings and, for the first time with Felix, Debbie had a lot of long service leave she used. The second time without the long service leave, we were just pretty broke and arranged to make interest only payments on our mortgage. We were very lucky we were able to make it work but also just accepted changes to our lifestyle while we had reduced income. We also did take quite a lot of time figuring out exactly what our entitlements were (which is not easy to do!) and how they could be used flexibly.

What kind of work does Debbie do?

She’s a social worker and now works part-time after taking 13 months off with both our sons. So she’s home with them a little bit, they’re at kindergarten and childcare, and we have grandparents helping out a lot too. When it comes to the day-today household stuff, Debbie does do more, but we try for balance; like with drop-offs and pick-ups, on the days she works I do those. And emotionally we’re both there in the same way. In terms of my parenting legacy, that’s what we’ve really worked towards, to be equally present for our children. That’s not to say I want them to think they are my whole world; I think it’s good for kids to know their parents work and do other things out in the world, for them to understand and feel pride and find meaning in that. But I don’t want them to feel like they’re a distant second.

What are your observations on gender equity – do you have a vision for this at the Museum?

Our workplace is pretty much a hundred per cent female, though we’ve got male security guards as well as volunteers. Our board is 50/50. That said, I’ve definitely encountered inequality. One situation with an influential stakeholder went very badly, and part of what I felt was going on was the way he reacted to me as a woman, and a younger one at that. There’s definitely a double standard around behavioural expectations in the professional context, and that’s been a big learning curve for me, to lead with grace when encountering gravitas, and adjust as there’s some battles you just don’t fight. And of course, that can equally apply to women.

How do you and Debbie share the emotional load at home?

We’ve always talked a lot; our entire relationship is founded on talking! So that’s just continued, as parents communication is so essential. But the other thing we do is use a family organiser app called Hub that enables us to share calendars and lists for everything like Aldi, Bunnings and Chemist Warehouse. The other thing is just knowing what each other’s strengths are. I’m the researcher; when we didn’t know what to do with sleeping, I went off and did tons of reading, then wrote it all up and came back
to Deb with a digest. Then we talked it all through and made a decision together. It helps to know who does what well.

Most of the people I’ve worked with at the Museum have been mums of young children, so the culture of the place before I even got here was flexible. If someone needs to leave immediately because their partner can’t do pickup at the last-minute or a child is sick, they just go. We had a treasurer once who said, ‘this is not the emergency room of a hospital, nothing should ever be that urgent.’ I’m conscious of taking sick leave and not returning until I’m ready to come back, in the hope that the team feels comfortable in doing the same. I think it’s about modelling and perspective and understanding people’s lives outside of work – but also a sense that if you give that to people, they will want to give back. Which ultimately is what our Museum is all about.

PrevPreviousTwo Heads are Better than One
NextIs it time for a StayCation?Next

This International Women’s Day, your voice matters more than ever